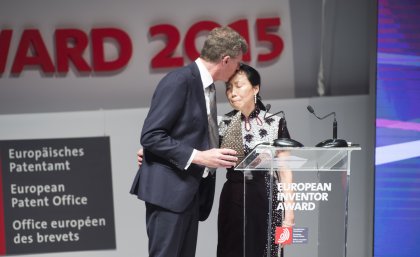 The scientists responsible for the cervical cancer vaccine were recognized with a 2015 European Inventor Award. Professor Ian Frazer from the University of Queensland, in Australia, won the Popular Prize together with his colleague, Chinese researcher Jian Zhou, who was recognized posthumously. The award was received by Frazer and by Zhou’s widow, Xiao Yi Sun, last June 11th, in Paris.

The Popular Prize is the only European Inventor Award chosen by public vote and has been attributed for the last 11 years to recognize the contributions made by inventions that accelerate social, technological and economic progress. Launched in 2006, the award not only gives inventors recognition but also acts as an incentive for other potential winners, protecting ideas and encouraging innovation.

“It’s a great honor to win this award and to have this research acknowledged on a global stage,” stated Dr. Frazer in a press release. “Events such as this highlight the exciting and innovative research coming from institutes all over the world, and show the importance of turning that research into practical solutions. It’s inspiring to have our team’s research celebrated by such a highly-respected group.”

Drs Frazer and Zhou co-developed the Gardasil vaccine to prevent cervical cancer and Frazier is currently developing a vaccine for genital herpes, a virus that attacks hundreds of thousands of people, threatens newborn babies and may be related to the early development of HIV.

His research has already granted Dr. Frazer a series of recognition, including over 20 awards on scientific accomplishments, including his nomination as an Australian National Living Treasure and Australian of the Year. In addition, he was also the founding CEO of Brisbane’s Translational Research Institute (TRI) and serves as chair of the TRI Foundation.

Peter Høj, vice-chancellor and president of the University of Queensland, was present at the cerimony and used the opportunity to congratulate Frazer. “Ian is changing lives not only through outstanding science and innovation, but also through exceptional philanthropy,” said Høj. “Ian and his wife, Caroline, are incredibly generous not only to research and education, but also to artistic and cultural causes. As a terrific communicator, mentor and ambassador for research, Ian fosters community-wide understanding of the social value of research, and encourages young and aspiring researchers to aim high and persevere with their ambitions to change and improve lives,” he added.